Play Dirty and Let the Kids Dig In

2014 is the year to end Nature Deficiency Disorder. Get out there, get dirty and get the kids and grandkids involved. Make mistakes and watch the garden recover. Grow some food and keep your neighbourhood gorgeous. 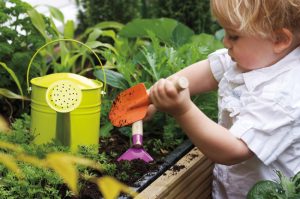 Nature Deficiency Disorder is the term that has been coined for humans who are losing touch with the natural world, by spending more time indoors or in hygienic environments than is healthy. While a fear of dirt, the natural world, and being outdoors is leading to sedentary lifestyles, our children are increasingly suffering from stress and anxiety disorders. And nature is just the remedy they need.

Spending time outdoors can include a day at the beach playing with sand and water, going hiking or simply digging in the garden. Babies even benefit. Let them eat dirt! Babies instinctually grab a handful of dirt and put it in their mouths. Doing so is a crucial part of developing a healthy immune system. Studies have shown that children growing up in hyper clean environments are likely to develop allergies and respiratory problems such as asthma.

Kids love being a part of the family, and giving them jobs in the garden secures their sense of belonging to the family unit. Provide them with kid-sized gloves, tools and watering cans for safe and enjoyable play. Fun tasks that kids love include watering, digging holes, planting seeds, staking tall plants and growing vegetables. They are fascinated by the cycle of life that is evident in the garden. Learning about earthworms that turn debris and soil into rich garden matter is sure to bring up many, many questions. Hunting for harmless insects under rocks and logs is the ultimate natural treasure hunt. Picky eaters have been known to taste just about anything they grow themselves. Try planting green beans, snap peas, cherry tomatoes, salad greens or kale.

For years now, I’ve been gardening professionally and have realized that as a general rule it’s really tough to beat plants at their own game. They just keep growing! To remove unwanted weeds from garden beds, it seems to take about three years of consistent digging. Removing the plant and its roots every two weeks for ten months a year for three years is what it takes to get rid of weeds. So if you accidentally dig out part of something you wanted to keep in the garden, don’t worry! Chances are it will keep growing.

Plant some crazy vegetables. All new vegetable gardeners make the mistake of planting too many vegetables. But the neighbours will love you for the bushels of cherry tomatoes and zucchinis that you bring over to their house. Try bitter greens such as kale, chard or radicchio. And get the kids involved so they’re keen to taste the fruits of their efforts. And if you don’t like them, or grew too much, many food banks have programs for collecting the bounty from home gardens. And they can always go in the compost bin, returning to the cycle of fertility in next year’s garden.

Let’s let kids and ourselves get dirty while we get happy. Spend lots of time in nature this year and ditch the little white pills prescribed to reduce your stress. Trade in the meds for a set of garden seeds, some new garden gloves and your own organic garden.